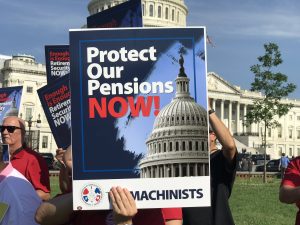 The IAM sent a letter urging members of the U.S. Senate to cosponsor and support S. 2254, the Butch Lewis Act of 2019.

“The Butch Lewis Act is the only solution put forth to date which appropriately and adequately addresses the multiemployer pension crisis by providing a lifeline to plans in critical financial status while maintaining the integrity of healthy multiemployer plans and the PBGC without cutting the earned benefit promises made to our nation’s retirees and working families,” said Machinists Union International President Robert Martinez Jr. “The U.S. House of Representatives version of this legislation recently passed the House with overwhelming bipartisan support. Now it is time for the Senate to act.”

Here’s how you can take action: