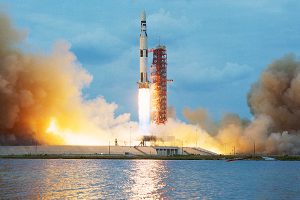 Fifty years ago, NASA launched its epic Apollo 11 flight placing man on the moon for the first time. The mission was aided by scores of Machinists Union members.

The eight-day Apollo mission started with the July 16, 1969 takeoff of a Saturn V rocket from NASA’s Kennedy Space Center in Florida. On July 20, the 240,000-mile flight to the moon reached the historic milestone with the lunar landing by Neil Armstrong and Edward “Buzz” Aldrin, the world’s first space mechanic and an honorary IAM member.

The July 20 lunar landing was the achievement of a goal set eight years earlier by President John F. Kennedy, who challenged the nation to place a man on the moon before the end of the decade.

In addition to Aldrin, many other IAM members assisted in the Apollo 11 mission.

That included IAM members represented by roughly a dozen locals in Florida and Texas. Among those was nearly 1,500 space mechanics, and members of nine IAM locals in Florida. The workers for companies such as Boeing and Trans World Airlines were tasked with orders such as maintenance, inspection and integration of the shuttle.

Machinists leaders such as then-Grand Lodge Rep. W. J. Ushery dubbed the workers as some of the unsung heroes who helped NASA reach the Apollo 11 milestone.